What Six-Year-Olds Are Good For

I’m just going to come right out and say it, Adventure Time is the best show on television right now.  Yes, it is on Cartoon Network.  Yes, I was introduced to it by my six-year-old brother.  Yes, The Simpsons is still on air, and The Simpsons is the greatest show of all time.  But right now, at this moment, I have seen nothing else that is as refreshing, as creative, or as downright entertaining as Adventure Time. 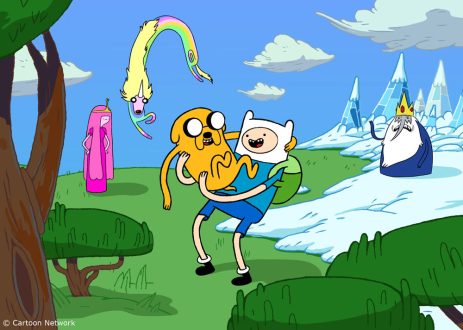 For the uninitiated, Adventure Time is based on a short that came out a few years ago, and it follows the antics of self-proclaimed adventurers Finn (a human boy with an awesome hat) and Jake (his canine companion, who inexplicably has the power to alter his size and shape at will) as they explore their native Land of Ooo.  The Land of Ooo is populated by all sorts of zany surrealistic characters, including a puppy-sized elephant, a rainicorn, a cantankerous old-man-winteresque Ice King, and all shapes and sizes of monsters to be slain and princesses to be rescued.  At the beginning of one episode, Finn and Jake are seen melting beached icebergs with flamethrowers in search of parts to be used in building their gauntlet-dock (“A dock which is also a gauntlet!”).  Jake, however, can find nothing but left childrens’ booties.

It is this kind of wonderful surrealism that saturates every moment of the show.  The ridiculous situations in which these characters find themselves are made all the better by the protagonists’ relative groundedness.  Perhaps “grounded” is too kind.  Finn and Jake relish the opportunity to perform heroic deeds, to fight monsters, to rescue princesses, and, more to the point, go on adventures.  In short, Finn and Jake are PCs.

More specifically, they are PCs in a decidedly old school world.  If you don’t believe me, or you think I’m overthinking things, one recent episode features the following:

This episode, titled “Dungeon,” is currently available on Kids On Demand if you have Time Warner Cable (at least it is in my region).  I strongly suggest anybody who has ever been remotely interested in anything I’ve ever said on this blog or elsewhere go and watch as much Adventure Time as you can.  There has so far not been a bad episode.